6 pioneering women that transformed life sciences as we know it 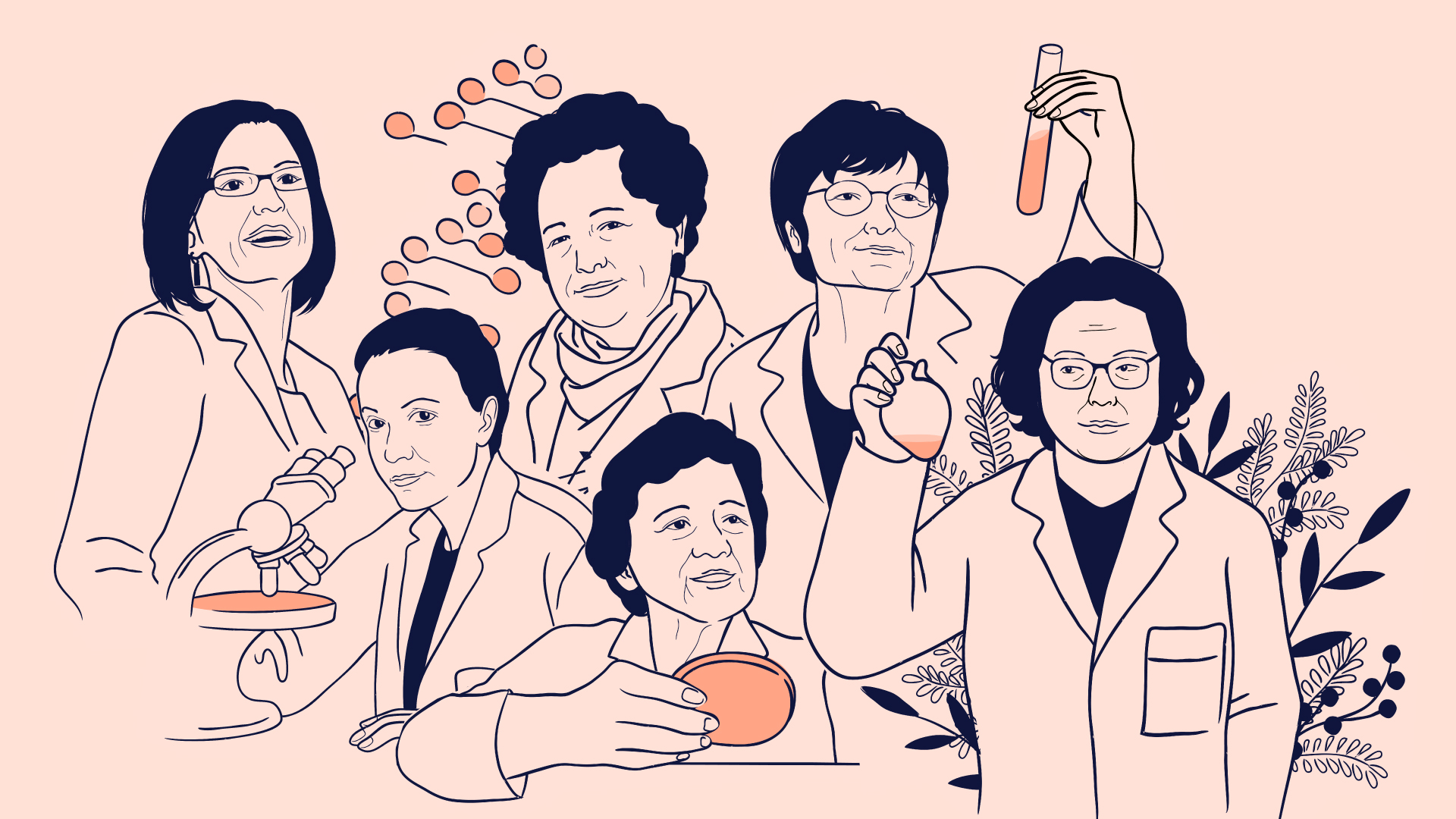 We wouldn’t be where we are today if it weren’t for the countless scientific discoveries made by pioneering women from around the globe. Their tireless efforts and groundbreaking work have, without exaggeration, saved millions of lives. When it comes to giving credit for life changing research over the past decades, there are far too many outstanding women to name. Unfortunately, there is still much gender disparity in science, and female researchers often face an unjustified uphill battle to earn global recognition. Even today in 2022, just 33% of all researchers are women.

Each year on International Women’s Day (March 8th), many businesses and institutions around the world take a moment to pay extra attention to what effort is being made to change unfair gender inequality in the workplace and in academia. In a bid to add our voice to championing women in science, in this piece we pay tribute to six pioneering women researchers in the life sciences that you’ve probably never heard of. Trust us when we say that they really deserve to be recognised!

So, in no particular order, let’s get to know six exceptional women, both living and no longer with us, who have transformed life science as we know it.

Jennifer Doudna, biochemist and professor at the University of California, Berkeley, helped create the CRISPR gene editing technique that treats debilitating diseases such as sickle cell anaemia, cystic fibrosis, Huntington's disease and HIV. This led to her winning the 2020 Nobel Prize in Chemistry together with Emmanuelle Charpentier - another exceptional female researcher who’s currently Director at the Max Planck Institute for Infection Biology and founder of the Max Planck Unit for the Science of Pathogens.

Doudna is a trailblazer in the ‘CRISPR revolution’. She and Charpentier were the first to propose that CRISPR-Cas9 (a bacterial enzyme that controls microbial immunity) could be used for programmable editing of genomes - now named as one of the most pivotal discoveries in the history of biology. Soon after this breakthrough, she published the book ‘A Crack in Creation: Gene Editing and the Unthinkable Power to Control Evolution’.

Jennifer Doudna’s professional credentials are quite something. She is an investigator with the Howard Hughes Medical Institute, president and chair of the board of the Innovative Genomics Institute, a faculty scientist at Lawrence Berkeley National Laboratory, a senior investigator at the Gladstone Institutes, and an adjunct professor of cellular and molecular pharmacology at the University of California, San Francisco. Doudna has contributed much important research in genetics and biochemistry - and she’s won various prestigious fellowships and awards. Who knows what more she’ll bring to the progress of life science!

Traditional Chinese medicine expert and pharmaceutical chemist Tu Youyou’s herbal discovery in the 1970’s (during Mao’s deadly Cultural Revolution no less) has saved and still is saving millions of lives. At the time, during the Vietnam War, thousands of soldiers were dying from a chloroquine-resistant form of malaria. Tu was appointed to lead a research group to find a cure. Tu poured over thousands of ancient traditional Chinese and herbal recipes, and eventually struck gold. She found that sweet wormwood (a common plant native to Asia) was effective at treating intermittent fevers - malaria’s tell-tale symptom. She and her team set to work in extracting wormwood’s malaria-inhibiting substance, called artemisinin, which was to become the active ingredient in powerful antimalarial drugs.

In 2011, Tu won the Lasker Prize and in 2015 the Nobel Prize in Physiology or Medicine for her truly lifesaving discovery. She is the first Chinese woman to ever win a Nobel Prize. 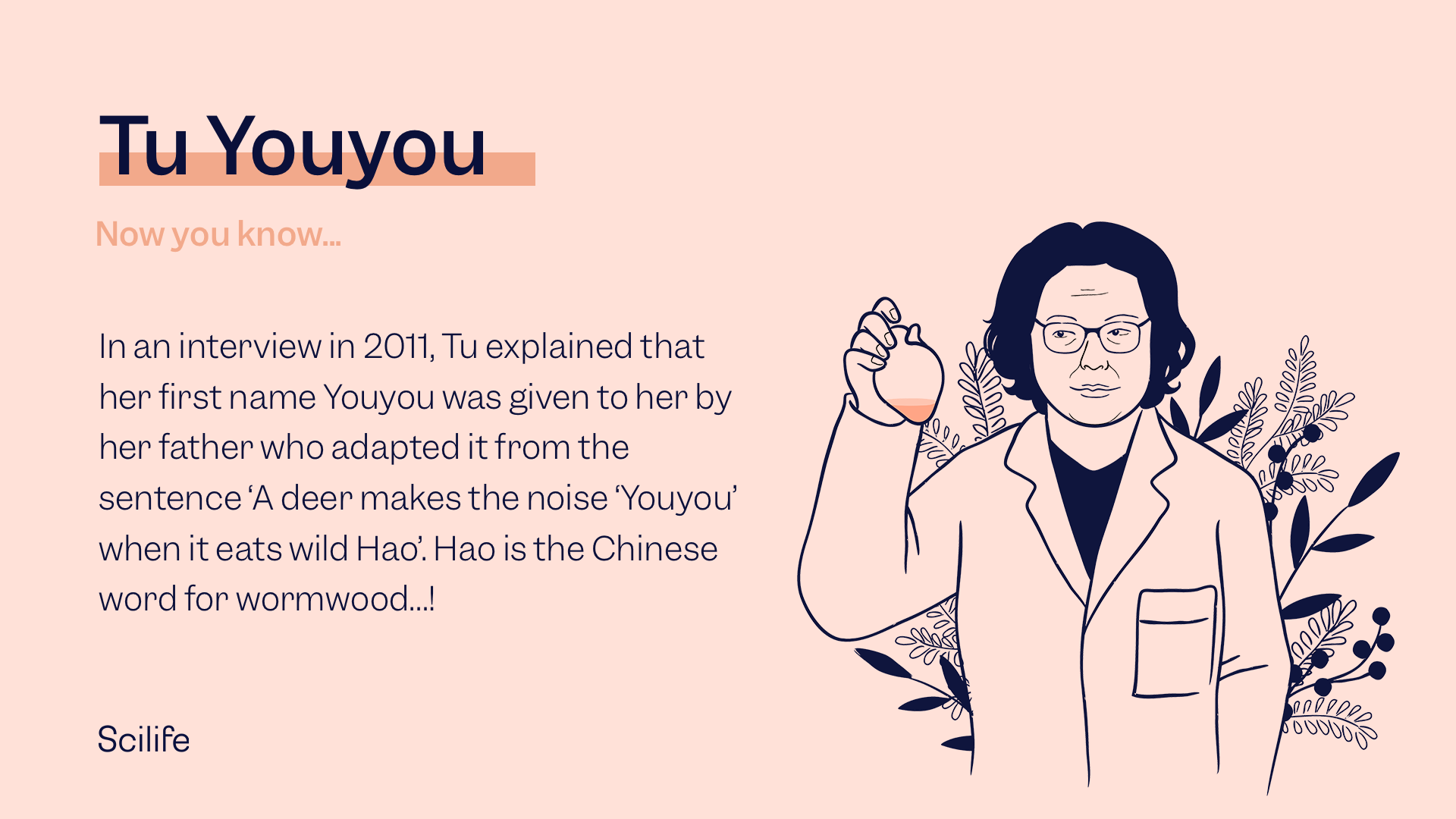 Trailblazing cancer researcher and surgeon Jane Cooke Wright revolutionised chemotherapy. In the 1950s, she and her research team developed a method which used human tissue culture instead of lab mice to test cancer drugs, and was the first to discover the application of certain drugs (Methotrexate) to treat breast and skin cancers, including treatments against a vast array of tumours in several types of leukaemia, Hodgkin's disease, lymphosarcoma, melanoma, and prostate cancer. Methotrexate is called the basis of modern chemotherapy and is still a major chemotherapy drug today against many types of cancer.

Pioneer Gertrude ‘Trudy’ Belle Elion is another biochemist and pharmacologist responsible for transforming countless lives, and a real example of a woman that just didn’t give up. She’s most known for creating the lifesaving AIDS drug AZT, but she also developed other effective antivirals, anti-cancer drugs and immunosuppressives that are used to fight rejection of organ transplants. 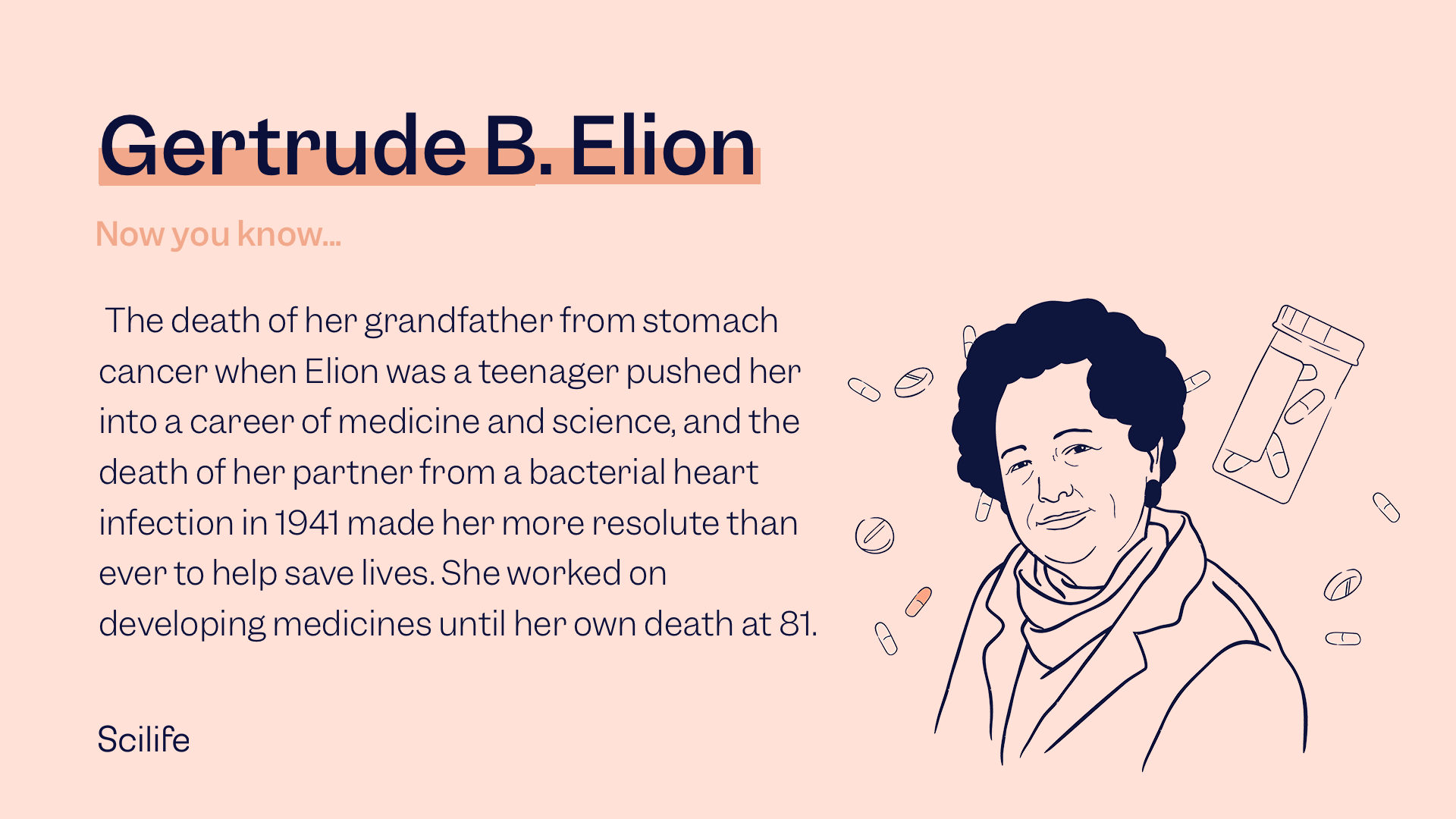 Gender bias was crippling in the 1940s. Despite stellar grades, Elion couldn’t get into a paying research job when she graduated because she was a woman. She applied for financial help to attend grad school but was rejected fifteen times due to gender bias. After working as a secretary and teacher, she eventually landed an (unpaid!) chemistry lab job. She saved up enough to self fund her masters degree. After many menial chemistry roles, she finally ended up with the company that is now GlaxoSmithKline and was able to finally carry out revolutionary research. Elion worked for the National Cancer Institute, the WHO, the American Association for Cancer Research and other institutions. She was Head of the Department of Experimental Therapy for Burroughs Wellcome and Adjunct Professor of Pharmacology and of Experimental Medicine at Duke University.

Her new technique of discovering novel drugs using a method coined ‘rational drug design’ led to her winning the Nobel Prize in 1988 together with George H. Hitchings and Sir James Black. Over her lifetime she won many awards for her tireless efforts in life science.

Cholera, the highly infectious and highly deadly bacterial disease from dirty water, is a huge problem in developing countries. Environmental microbiologist Rita Colwell’s 25 year long research into Cholera and how it spreads have led to the discovery of a simple, creative and inexpensive way in which even the poorest villagers without drinking water treatment can filter water to cut their chances of catching the disease by half: folded sari cloth over water pots. 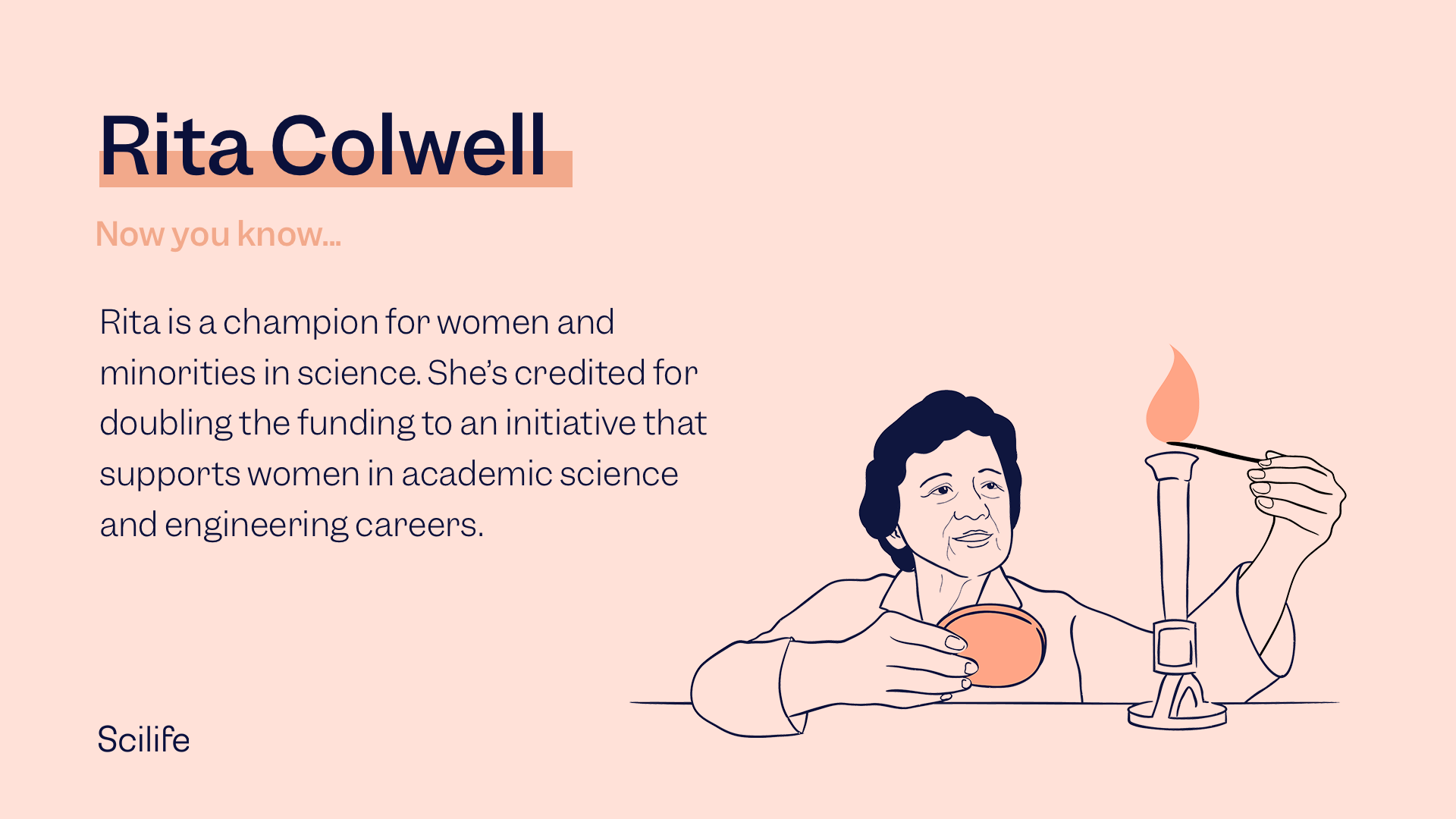 Collwell is a prolific author with over 800 scientific papers to her name, has penned 19 books, founded a bioinformatics company and has even produced an award-winning biology docufilm ‘Invisible Seas’. In 2020, her memoir ‘A Lab of One's Own: One Woman's Personal Journey Through Sexism in Science’ was published. She was Director of the National Science Foundation for the US government for 6 years. She’s a professor at the University of Maryland at College Park and at the Johns Hopkins Bloomberg School of Public Health.

Hungarian-American biochemist Katalin Karikó has made substantial contributions to the therapeutic use of mRNA, technology that has led to the development of COVID-19 vaccines. For this, she has won more than a dozen prestigious science awards, and was even named Time Magazine's Hero of the Year last year.

Karikó is senior VP of BioNTech RNA Pharmaceuticals, and adjunct professor at the University of Pennsylvania.

The road to a more equal future

Of course, there are innumerable female researchers who have, and are, currently massively advancing life science. This tiny selection of remarkable researchers does not represent even the tip of the iceberg of past and present pioneers in science. Neither does our short list attempt to rank the success or contribution of anyone, or list one researcher as superior above the next.

What is clear is that women in life science, and their many transformative achievements, are still overlooked even today. The situation is getting better, but there’s still a long way to go until true gender equality. Every company, especially those that are STEM businesses, should champion, train and encourage women throughout their careers.

To all women in science, we want you to know that we stand with you all and thank you for improving and saving humanity!