Are ‘Quality by Design’ and ‘Six Sigma’ the same concept?

The short answer…no, but they’re similar!

Read on to find out why that is.

What is Quality by Design (QbD)?

Quality by Design (QbD) is a structured and risk-based process for designing and launching high quality products. Quality by Design applies proven methods to close the gaps that often cause issues in traditional production processes, such as

In the official guidelines, QbD is defined as: ‘a systematic approach to development that begins with predefined objectives and emphasizes product and process understanding and process control, based on sound science and quality risk management.’  Quite the mouthful!

The elements that make up QbD include:

The QTPP and the CQAs can together be termed key performance indicators (KPIs).

Since QbD is a risk-based approach, the FDA expects manufacturers to assess the root cause for every possible event of deviation from these KPIs and to identify the CPPs or the CMAs which cause this deviation. Manufacturers are expected to build a knowledge space around how these QTPP, CQAs, CMAs, and CPPs are interrelated. This knowledge space can be built using literature, know-how in similar products, empirical experiments, Design of Experiments, or any other statistical modeling approaches.

What is Six Sigma?

Invented by a scientist who worked at Motorola in the 1980s, Six Sigma systematically gets rid of inefficiencies and defects (variations) by detecting them through statistical analysis. It’s a methodology that helps make data-driven improvement decisions, rather than relying on guesswork.

The name ‘Six Sigma’ is derived from the bell curve used in statistics where one Sigma represents one standard deviation away from the mean. The defect rate is extremely low if the process only shows six of these Sigma’s, three above the mean and three below. That’s because only 3.4 out of a million events along a bell curve would fall outside of six standard deviations. In other words, an error or defect only occurs about three times in a million, statistically speaking! So, Six Sigma is a performance metric that corresponds to 3.4 defects per million units or opportunities.

Confusingly enough, Six Sigma also refers to a management strategy for the organization-wide deployment of improvement projects, which is out of this article’s scope but can be read about in more detail here. In brief, the ultimate goal of a Six Sigma project is to improve the quality of a product, process, or service while providing management principles to accomplish this goal.

What’s the difference between Six Sigma and QbD?

In a QbD project, the therapeutic efficacy of the product and patient safety are more important than commercial success. In other words, it’s an FDA proposed quality management approach that focuses on delivering the best quality product to the patient irrespective of cost-benefit to the manufacturer.

Now comes the interesting part! Although Six Sigma and QbD are separate concepts, they can be used as a fused approach.

If QbD is implemented using the DMAIC (Define-Measure-Analyse-Improve-Control) philosophy of Six Sigma then manufacturers can benefit from the best of both worlds. This is how it’s done: 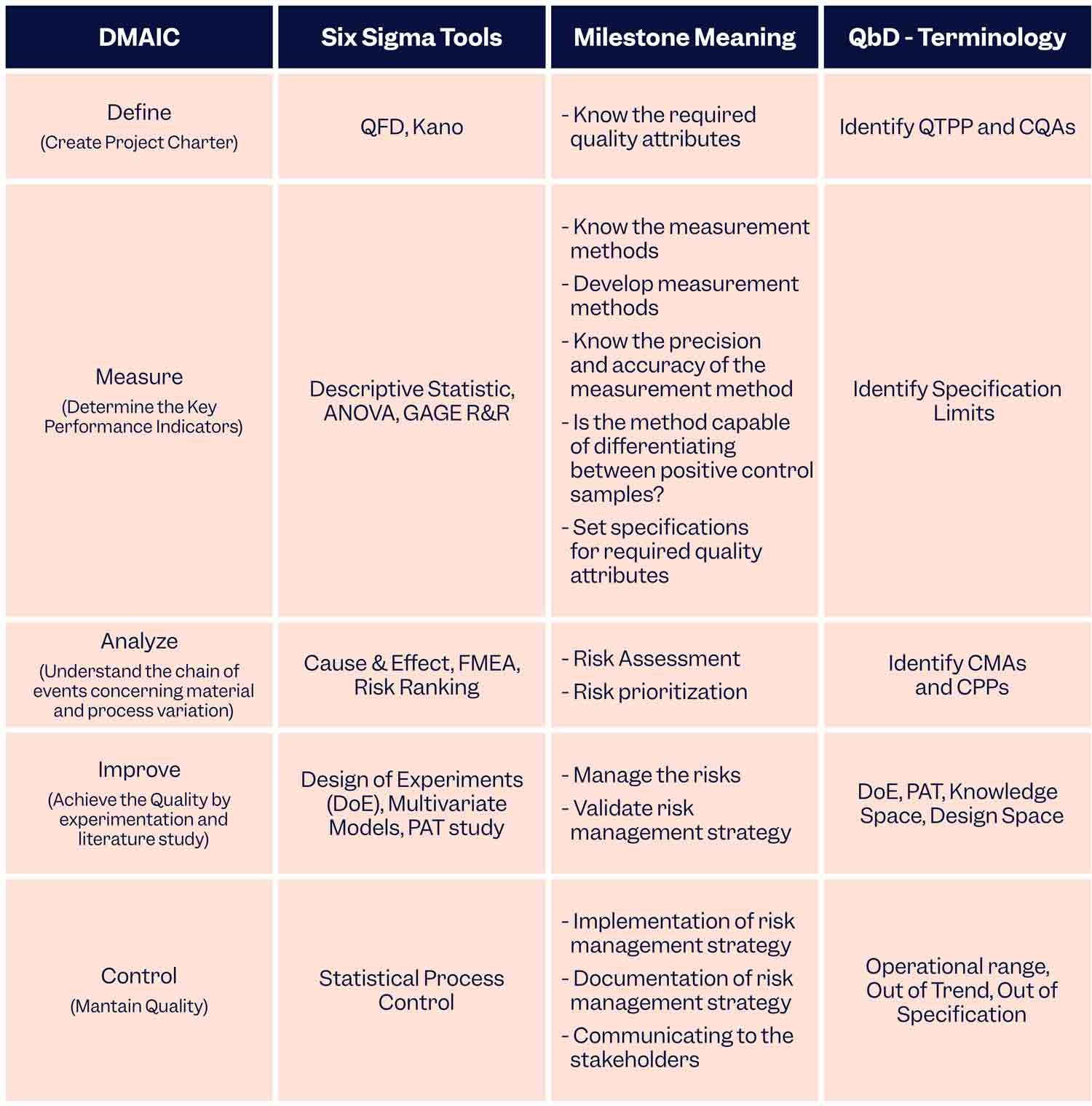 Quality by Design and Six Sigma are two approaches to quality improvement that have slightly different end objectives. In any case, if manufacturers use the Six Sigma philosophy to get the cost-benefit and structured approach for organization-wide governance of QbD principles, then they create a win-win situation for the patients as well as themselves.